The Other Bloomsday - Seattle 2015 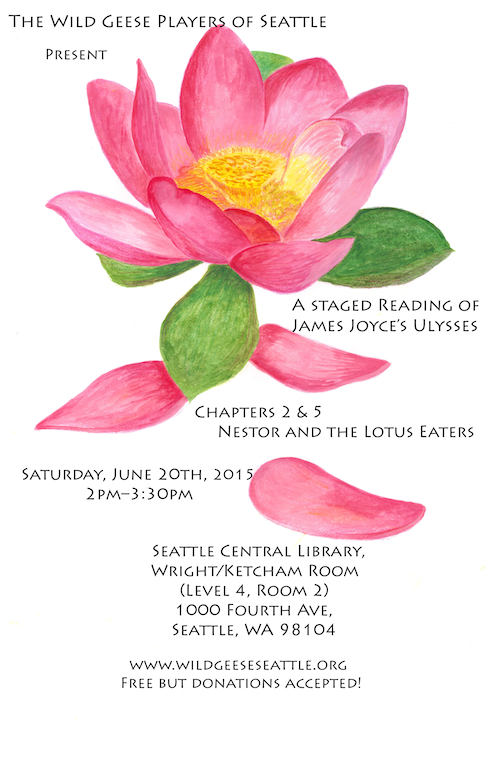 The Wild Geese Players of Seattle will present a staged reading of Chapter 2, “Nestor”, and Chapter 5, “The Lotus Eaters”, adapted from the 1922 edition of James Joyce’s Ulysses, on 2pm on Sunday, June 20th, 2015, at The Seattle Central Library 1000 Fourth Ave, Seattle, WA 98104 Map. Donations towards costs of posters and props are welcome.

Our annual Bloomsday readings started in 1998. We started afresh last year, with the chapters that introduce the two primary characters of the book, Stephen Dedalus in Chapter 1 and Leopold Bloom in Chapter 4. This year, we’re continuing with Chapter 2, “Nestor”, and Chapter 5, “The Lotus Eaters”.

The Seattle Library recorded our reading.

Stephen Dedalus, possibly Ireland’s most lackluster schoolmaster, manages to get through a truncated set of lessons—but not without continued ruminations about his mother, mothering in general, and earlier annoyances by Mulligan and Haines. Later, collecting his pay (already spent) from headmaster Deasy, possibly Ireland’s most enthusiastic defender of cattle, Stephen endures a review of Deasy’s perspectives on life, money, and Irish history—generously larded with expectable points regarding the role of Jews in world affairs.

Meanwhile, Leopold Bloom continues making his way to Paddy Dignam’s funeral—but along the way, there are of course several Things To Be Done. From the post office, he receives a letter from his love-interest-by-mail (not put off by his last letter); stops in to a Catholic church service to reflect on theological matters; runs an errand for Molly at the chemists’, and picks up a bar of soap for himself; and inadvertently supplies a betting tip to an acquaintance on his way to the baths, where he envisions himself relaxing in full flower.

Reading at the Seattle Central Library

The reading will be held in the Seattle Central Library at Level 4, Room 2 — Howard S. Wright Family & Janet W. Ketcham Meeting Room. Please arrive before 2pm to find a seat. The reading will take roughly 90 minutes.

We encourage you to download Ellen Coyle’s Nestor/Lotus Eaters poster (PDF, 4.1MB) and post it around town.

This is our eighteenth year of Bloomsday readings. (Press Release).