The Other Bloomsday - Seattle 2010 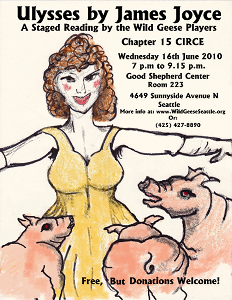 Stephen Dedalus and his friend Lynch, both very drunk, have entered Nighttown, Dublin’s red-light district, in search of female companionship. Leopold Bloom, who has some paternal feelings for Stephen, has followed them. A long chapter full of hallucinations and nightmares, where Bloom confronts many of his unspoken desires and emerges strengthened.

We had a very successful reading of the first half of this enormously long chapter at the University Bookstore last year. We conclude the Circe chapter this year.

Note: this chapter is intended for an adult audience. Bloom will be excoriated and sexually humiliated by the Circe character.

Further background information on the Circe chapter can be found at the Kennesaw guide to Ulysses and the Joyce portal. Or read the text of the chapter here.

The meaning of Circe

The structure of James Joyce’s Ulysses is loosely based on Homer’s Odyssey, in which the hero Odysseus wandered around the ancient Mediterranean for decades longing to get home to his wife Penelope. Joyce’s Odysseus/Ulysses is Leopold Bloom, a slightly pathetic jewish Everyman wandering around his native Dublin on June 16th 1904. He feels bad because his wife Molly is being unfaithful and their marriage has been sexless for many years, since their baby son Rudy died. At the end of the previous chapter, Oxen of the Sun, Bloom felt protective and fatherly towards Stephen Dedalus, the son of a friend.

In Homer’s Circe episode, Odysseus maintains his wits and uses the herb moly as advised by the god Hermes to avoid being unmanned during his seduction by the goddess Circe who has enticed his men with song and feasting before transforming them into pigs. She falls in love with Odysseus, reverses the spell on his men and they feast for a year before she helps them on their way home.

The Circe story above inspires Joyce’s schema for his chapter, which includes magic, whore, hallucination, man-hating ogress, and personification. A major theme is that sexuality degrades men to the level of dumb unconscious swine… note the multiple references to pigs. The Homeric transformation to pigs may actually refer to anticholinergic intoxication, producing amnesia, hallucinations, and delusions, and counteracted by the snowdrop flower, fitting the description of moly. There are some references to Bloom being womanly, hinting at the overt gender transformations in the second half of the chapter. Joyce’s usual multitude of voices are relatively easy to discern because the text is written like a play, though depiction of the many hallucinatory sequences and extreme transformations would require ultramodern animation techniques. 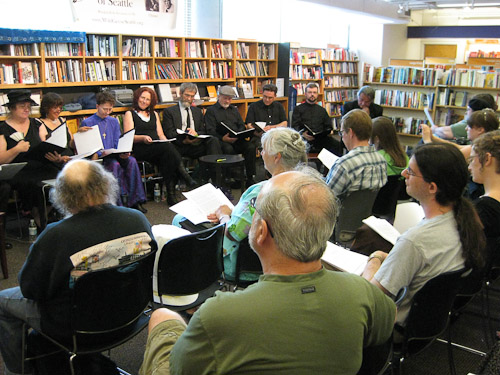 Just as Odysseus rescued his men, Bloom survives many things that could “unman” him and eventually at the end of the chapter succeeds in helping Stephen, an important step towards regained manhood and fatherly potency. On another level, this bodes well for Ireland’s future because James Joyce (father, Leopold Bloom, realist) wants the future Ireland (son, Stephen Dedalus, the Irish literary renaissance) to be manly and powerful and good and uncorrupt. Joyce hates how Irish people are made impotent by British rule (Bloom the cuckold) but worries that nationalism is crippled by racism (the Citizen), consumerism, sentimentalism (Gerty) and hypocrisy (priests, socialites).

The Circe chapter is also a recapitulation of Freudian psychoanalysis, representing Bloom’s descent into his unconscious/dreams (pig mind) where various demons, vices and psychiatric symptoms are confronted, named, and purged, and he overcomes unconscious guilt that has paralyzed his volition. It is also a ritual of confession and a crazy epiphany and a cathartic comedy where anything is possible. Stephen Dedalus undergoes a parallel journey confronting his own demons (in the second half of the chapter).

The plot of this year’s chapter, Circe

The action begins at midnight in “Nighttown”, Joyce’s term for the red light district of Dublin, where time and space are warped with a theatrical hallucinatory tinge.

Stephen and his friend Lynch arrive. Stephen is drunk and joyously perverts religious quotes (chooses sex over religion). Bloom has followed Stephen to Nighttown, paternalistically worried he will be corrupted and lose his money. Bloom narrowly escapes being run over by a trolley, but it cures his stitch (spear in Christ’s side). He buys some pigbits (chooses pork over religion). (Ergo, sex=pork). He imagines being mildly criticized by his late parents, Molly/Marion his wife, and Gerty with whom he “flirted” earlier (anxiety).

Bloom snaps back to reality when he meets Mrs Breen his old flame, and they have fun flirting and sharing memories. While Bloom is accosted by British soldiers, he imagines being put on trial and accused of sexual harassment by a maid, and several posh Dublin women, then a jury of his “peers” appears and he is sentenced to hang (paranoia). The dog who has been sniffing the pork and transforming its breed every minute (psychosis?) becomes the ghost of Paddy Dignam whose funeral Bloom attended that morning.

Bloom walks on and meets Zoe who confirms Stephen is upstairs in the brothel. Bloom’s anti-smoking comment to Zoe evolves into a political scene where he is idolized (delusions of grandeur). When this turns sour, people call for Bloom’s downfall or excuse him on grounds of his sexual abnormalities, his race, and the fact he is about to give birth.

Zoe “reappears” and escorts Bloom into the brothel, prompting Stephen to allude to judgement day. Many inanimate objects speak (schizophrenia). An evangelist/prophet Elijah and Bloom’s grandpa Virag appear and criticize. Bloom’s romantic alter-ego Henry Flower also appears. Throughout, Bloom retains his sanity and composure amidst hallucinations and transformations and the animalistic fleshpot atmosphere, helped by his lucky potato (moly) as well as his relative sobriety and outsider’s perspective.

In the second half of the chapter, which we will read in 2010, Bloom meets his Circe, the brothel madam, Bella Cohen, and survives exceedingly humiliating interactions with her. The chapter will end with some crucial turning points within the Ulysses storyline. First, Stephen rejects religious hypocrisy and guilt when he ends a vision of his dead mother’s ghost by smashing a chandelier. Next, Bloom overcomes his paralysis and begins to fulfill his paternal urges when he intervenes to prevent Stephen from being overcharged for the breakage by Bella, and to curtail Stephen’s beating by British soldiers. This helps to assuage Bloom’s eternal sadness over Rudy, and more grandly implies Ireland will regain power to father its own rosy future.