The Wild Geese Players of Seattle will present a staged reading of Chapter 11, “Sirens”, adapted from the 1922 edition of James Joyce’s Ulysses. For the first time ever, our annual reading will be presented online and available for all to stream on Bloomsday, June 16, 2020 here at WildGeeseSeattle.org. 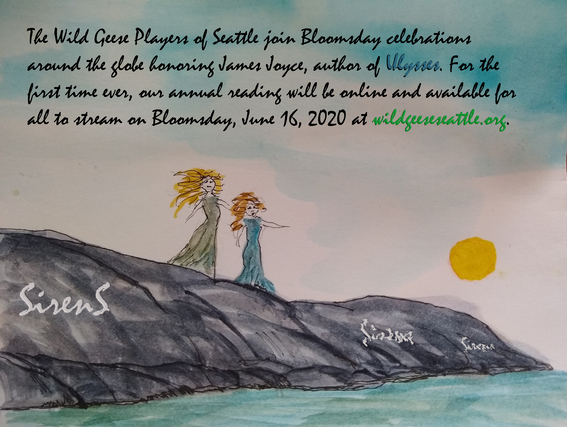 Bloomsday (Bloom’s day, named for Ulysses’ main character, Leopold Bloom) refers to the 24-hour period on June 16, 1904 in which Ulysses is set. Ulysses follows the wanderings of Bloom, a Jewish everyman, and Stephen Dedalus, a young writer and Joyce’s alter ego, as they wander the streets of Dublin.

Join us online for Chapter 11, Sirens, where it is 4 pm and the Dublin characters gather at the Ormond Hotel by the banks of the River Liffey. Leopold Bloom joins Father Cowley, Simon Dedalus, Richie Goulding, Lenehan, and Ben Dollard among others, to enjoy an afternoon of songs and music, with the divine Miss Douce and the comely Miss Kennedy setting the scene.

Special Thanks to Matthew Donegan-Ryan

Read along with the script. Adapted by George Reilly from the Project Gutenberg text.

This is our twenty-third year of Bloomsday readings. (Press Release).

Co-director Roger Berger has provided some additional notes on the Sirens chapter.